The Toyota Aygo was the best value car of 2008 losing the least amount of money, according to research from parkers.co.uk.

In its annual depreciation report, Parker’s compared last January’s new prices with what an owner could expect to get if they sold privately now.

A buyer who got their hands on a Toyota Aygo last year will now have lost just £1,515 over 12 months – the equivalent of £4 per day.

It’s the third year running that the Aygo has featured in the top 10. It was top of the pile in 2007 and took eighth position last year, but this is its best performance ever. It’s sister cars – the Citroen C1 and Peugeot 107 – took second and fifth spots.

The Fiat 500 makes its appearance in the top 10 too. It even finished ahead of the MINI, which has been a star performer for residual values since 2001.

The best performers of 2008 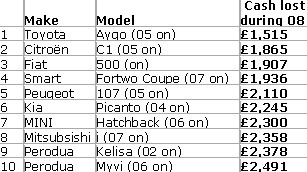 All the cars in this year’s top 10 have one thing in common: they’re all small.

Parker’s said: “Increased demand from buyers trading down to smaller, more economical cars has pushed up prices – something that’s set to continue as recession bites. The combined loss of the top 10 is around £100 less than it was in 2007.

“At the foot of the table the buyers who have lost a small fortune are those that started out with a large one. The Maybach continues to lose eye-watering sums in the first year of ownership, while the owners of most luxury cars need to be prepared to lose a substantial sum in their first year of ownership.”

AM Poll
Will new car supply be restored to normal levels in 2022? Please leave a comment
Vote
View all
2696