Subaru is to show off its Boxer hybrid technology in a new Tourer concept at the Tokyo Motor Show on October 21. 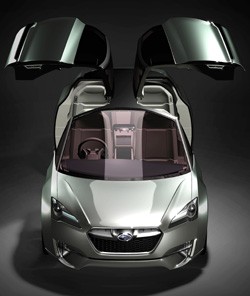 The new car will still feature symmetrical all-wheel drive (AWD) and is powered by a 2.0-litre turbocharged petrol ‘Boxer’ engine, allied to two electric motors. The electric motors are powered by lithium-ion batteries – a 10kW item at the front and a 20kW unit at the rear.

In normal driving conditions the direct-injection petrol engine is used, but at lower speeds and start-up, the rear electric motor drives the car. The forward electric unit, which is mainly used as a power generator, kicks in to assist performance and efficiency while tackling inclines.

“This vehicle shows that our engineers are capable of developing something which is both technically advanced and stylistically enthralling, hinting at our future design direction.”

Subaru will also be showing its Impreza WRX Carbon based on the Japanese-market STI A-Line and its plug-in Stella electric vehicle.