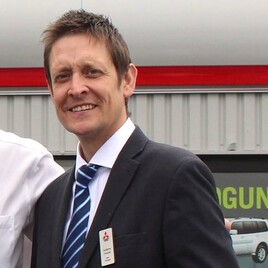 The 2022 AM Awards winner of Dealer Principal/General Manager of the Year is Andrew Iveson of Livingstone Motor Group.

Ensuring the staff have a leader they can trust, who communicates well, who demonstrates focus and complete belief, and who guides them through uncertainty is critical for this winner.

Andrew Iveson has worked up through the ranks at Hull Mitsubishi, now known as Livingstone Motor Group, from trainee sales executive in 1997 to general manager, and lately has been required to lead his team through considerable uncertainty and change.

With Mitsubishi set to exit the UK in 2021 the Hull-based dealership’s board had to consider the company’s future carefully after 30 years representing the Japanese manufacturer and even longer in the same family ownership.

“I had 20 faces looking at me to solve this problem,” said Iveson in his awards entry.

Iveson planned and proposed a management buyout to the board. He set out to court other franchises. Both were ultimately successful. Iveson rebranded the business to Livingstone Motor Group and added Subaru, Isuzu and SsangYong franchises.

It ranked 4th for Subaru in Q4 2021 and 1st for SsangYong in January, while its Isuzu stock is forward sold until November. Its 2021 profitability exceeded 2019’s despite the costs of rebranding, refurbishment and training.

Iveson reviewed wage structures to make staff less reliant on bonuses, and to motivate the sales team in this period of long lead times he pays commission on the sale and commission again at handover if the delivery is longer than three months. “Yes I pay twice but it instantly motivated the staff to get selling,” he said.

“I have brought positivity, enjoyment, stability and shown direction; how change should be and can be embraced not scared of,” said Iveson. He’s flown the flag for the dealership, built a plan and stuck to it, and demonstrated to staff that he will lead them to success.