Roland Bouchara, the boss of Renault UK, insists the company is going through a painful, but entirely voluntary, repositioning as it becomes a car company that can make money at 5% market share.

He believes far too many car companies are obsessed with market share and Renault had to be one of the first to walk away from the fight.

To that end, the Renault dealer network has been re-engineered, including some downsizing of existing facilities in anticipation of permanently lower volumes. His explanation makes perfect sense – after all Bouchara is a serious industry figure.

However, there are three issues with this strategy that he needed to address.

Firstly, Renault has lost share because it has clearly cut back on fleet deals – but it has also lost share in the retail market, which seems odd if retail is now the centre of Renault’s strategy.

The Renault line is that retail sales have fallen much less than fleet sales and will bounce back in the final quarter – the company says it chose to import fewer cars to the UK (especially Twingos) when the pound fell below €1.10. It is adamant it will hit 5% in the final quarter – and Renault insists they will be genuine sales, not fleet “giveaways”.

He also thinks the long-term trend is for a strengthening of the pound, which will make it easier for Renault to push small cars at a profit.

Secondly, there are two parts to running a successful car company – having a sensible business plan and having good products.

The business plan sounds good, but Renault has had a pretty severe kicking in the UK motoring press for its products, from the Clio to the Laguna.

As to the Laguna, he said “A disappointing result, but we have plans to reposition it that will help in the business market.”

In fact, only a week after our interview, Renault announced that there was no realistic prospect of getting a significant return on the money invested in the Laguna and much of the cost would simply be written off.

And what of the Koleos, which appears to have been the subject of fairly spectacular discounting in the early part of the year?

He agreed they had been clearing out old stocks with discounts, but the new model (there is just one version now, so it cannot be described as a model range) would be sold at full price.
Finally, he said Renault had made huge strides in improving quality, with a 66% reduction in breakdowns of new cars over the past two years.

Thirdly, can Renault keep its nerve and refuse to chase volume again?

Bouchara insists that, having come off the “drug“ of heavily discounted fleet sales, it does not intend to relapse.

While that is no doubt true of the UK operation, can it persuade its masters in France not to send it shiploads of unwanted cars?

Bouchara says he has agreed the strategy with France (as of course he must have), but just days after meeting him, Renault’s half-yearly results were announced.

The accompanying commentary, explaining a very serious €2.7 billion (£2.4 billion) loss for the group as a whole, included an intriguing comment that Renault had been “over-prudent” in cutting back on fleet sales and the strategy should be “amended”. 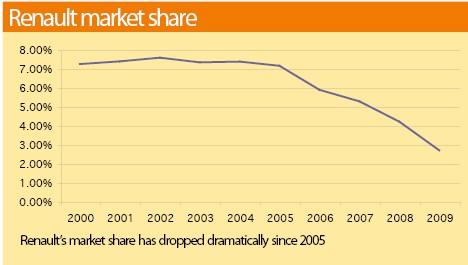