Peugeot's new electronic city car based on Mitsubishi's i-Miev, the i0n, will go on sale in the UK at the end of 2010. 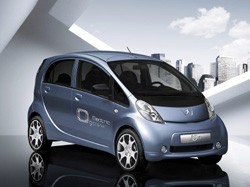 The car has a range of 80 miles and Peugeot is registering interest in the car via www.peugeot.co.uk.

The French brand has already signed letters of intent with a number of companies and local authorities across Europe, for the vehicle to become part of their car-sharing and vehicle fleets.

The car develops a maximum power output of 64bhp and has a top speed of 80mph.

It has an operating range of 80 miles on a single charge of its lithium-ion batteries and they can be recharged in six hours using a conventional mains power supply or recharged to 80% capacity within thirty minutes when using the fast charging system.