Mitsubishi has delivered 25 of its i-Miev electric vehicles as part of the Government funded Technology Strategy Board user trials. 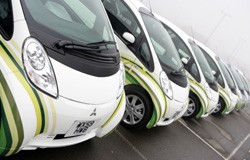 This is the first stage of a Government-supported UK-wide project to trial electric and ultra low emission vehicles – and begins in the West Midlands.

The i-Miev has a top speed of 81 mph, a range of 100 miles depending on how the car is driven and can be trickle charged from flat to full in seven hours at any UK three-pin socket. In addition the i-MiEV can be fast-charged from flat to 80% in 30 minutes using a quick charger.

The CABLED consortium will manage the project after being confirmed in June as one of eight successful teams in the £25 million Technology Strategy Board Ultra Low Emission Vehicle Demonstrator Competition.

The project is worth £15 million and will trial 110 vehicles on the roads of Birmingham and Coventry. UK-wide, 340 vehicles are being tested using funding from the Technology Strategy Board.

The other five manufacturers that will roll out vehicles in 2010 as part of the Technology Strategy Board, include: