December brings some cheer to the used car market

According to BCA’s latest Pulse report, average used car values improved for the second month running in December, but remain well behind where they were a year ago.

Used values appear to have stabilised in the second half of 2008, following large falls earlier in the year.

In some ways the December increase was illusory as it reflects a significant shift in the mix with reductions in lower priced dealer part-exchange volume resulting in overall increased values.

However, used cars currently represent exceptional value for money and the fact that values have stabilised in recent months is encouraging.

While overall average monthly used car values rose in December, not every sector enjoyed the increase.

However, average part-exchange values climbed by £31 (1.5%). With significant falls in the new car retail sector, fewer part-exchange vehicles have been reaching the wholesale sector. This relative shortage has kept values on an even keel.

The latter part of the year was ‘quieter’ in terms of price swings, with part-exchange values of around £2,000.

The average performance against CAP Clean improved marginally against November, but has been sitting around the 87% mark for a number of months. 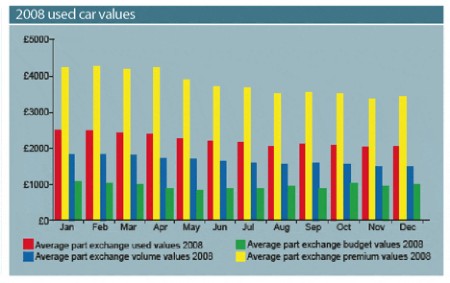 Volumes are fairly small and model mix could certainly have affected the result. But, this is just the sort of good value stock that the market needed in the current conditions.

CAP performance remains fairly robust at more than 85%, against a year-low of 77%.

Premium part-exchange cars improved in December for the first time in three months. Once again, values were relatively stable in the second half of the year, having fallen quite sharply in the late spring.

And again, buyers gravitate towards the best value cars in the sector, but even with this added demand values in December are £800 down on last January.