The ever-popular MX5 remains Mazda’s top-selling model in the UK, making up more than a fifth of its total sales.

Probably more surprising is the fact that more than half of all Mazdas sold in this country are hatchbacks. They make up 54.4% and help the marque to be the 17th most favoured make in the UK.

Manual transmission is certainly favoured by Mazda buyers with only 7.3% opting for automatics.

Almost a third of the models are privately owned by women while men make up 52% of owners while the gender of the owners of the remaining vehicles is unknown.

Just under 10% are company owned.

When it comes to popularity, the Mazda6 comes in second behind the MX5 with 17.7% of the total registrations. The Mazda 323 follows closely on 16.1%.

Private number plates have been put on Mazdas by 15.7% of owners. The top 10 locations to spot a Mazda are Birmingham, Glasgow, Peterborough, Newcastle upon Tyne, Chester,
Nottingham, Sheffield, Bristol, Cardiff and Leicester. 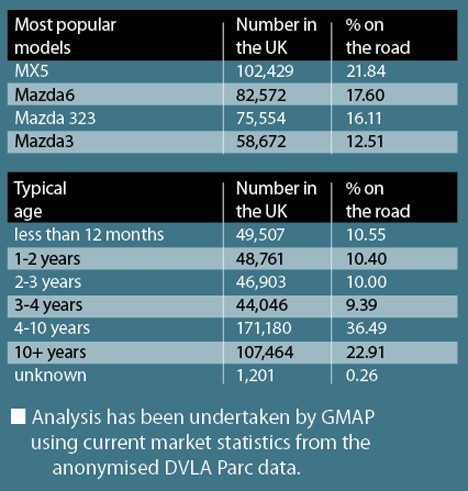