The past few months have provided extensive evidence that the used car market has peaked following the dramatic first quarter of 2009.

As can be seen in chart no.1, CAP’s tracking of 3yr-old disposals shows sales performance levelling off after April’s dramatic rise in Black Book values, with 2006 06 plate disposals averaging 99.1% and 98.8% of CAP Clean in April and May respectively.

Many have partly attributed the notable first quarter of the year to a shortage of available used stock.

Disposals volumes collated by CAP for January to May inclusive shows a 7% increase on the same period in 2008.

Rather than fewer cars actually being sold, it is the significantly higher conversion rates causing reduced levels of auction re-entry that is causing a perception of reduced sales & stock.

Dealers re-stocking from last year coincided with increased retail demand as buyers who delayed large purchases as the recession took hold turned to the used market as the more cost-effective way to change cars.

Retail demand for used cars continues to be high, with additional impetus having definitely been given by the Scrappage scheme, although those manufacturers with smaller models are definitely benefiting most from the scheme, with CAP’s Research team confirming particularly positive feedback from Toyota, Fiat and Kia dealers. 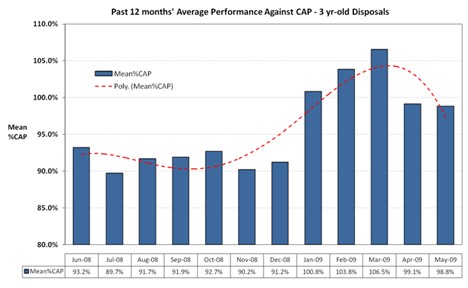 Following the recent plateau in the prices being achieved on disposal, CAP’s June edition of Black Book shows a minimal overall average change at 3yr60k, of +0.04%. As usual, however, this ‘overall book movement’ belies the varied underlying Sector trends.

The unprecedented depreciation last year of 4x4s, which saw 3yr values drop by an average 30%, means values are still recovering – up by an average 2.0% this month. Likewise, the Large & Small Executive Sectors have continued to recover into June, up by a mean 0.6% and 1.0% respectively. Table no.1 shows the average movements for all major Sectors at three different ages and mileage.

A continuing trend is the stronger performance of late-plate vehicles as evidence by the 0.4% increase for 1yr20k models. This is no doubt helped by the consumer shift from new to used as buyers see the value in heavily discounted nearly-new models.

Analysis of book values over the past six months helps put into context how much the market has recovered. As can be seen in Table no.2 all sectors are showing a net increase in 3yr60k values from December 08 to June 09, with 4x4 values leading the pack, up by an average £1,760. Very few models in this sector show a net drop in values over this period; only the petrol Volvo XC70 (04-08) and the Cadillac Escalade (05- ) which moved down 3.6% and 1.4% respectively.

The best performer has been the diesel Volvo XC90 (02-07) increasing by 36.3% which represents a recovery of an average £3,936, no doubt helped by the fact that this model’s values were at what could be considered exceptionally low levels late last year. 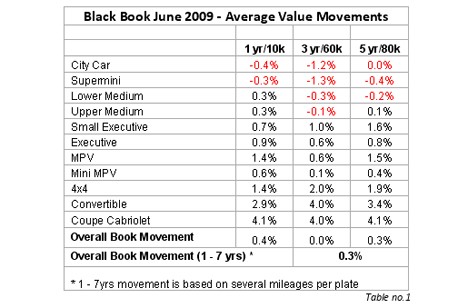 The CTS and Escalade’s performance is a good indication that these large American petrol-engined models struggle to find a market in the small-car dominated UK arena.

Key movers among the Lower Medium sector included the petrol Citroen C4 (04- ) which has experienced an average increase every month since February this year, and sees an overall six month movement of 25.3%, the largest positive movement in this sector, with the petrol Mazda 3 (04-08) following closely with a rise of 21.3%.

Conversely, Toyota’s Prius finishes last, depreciating 7.3%, well behind the second-last placed Seat Toledo (05- ) Diesel, which fell 1.4%. Comparing fuel types, of the top 20 Lower Medium models increasing in value, 15 of these are petrol, whereas 14 of the bottom 20 ranges for appreciation are diesel variants.

What is becoming increasingly clear from recent events and trends is that the balance between the New and Used Markets is becoming ever more relevant and May’s new registration figures continue the recent trend; 24.3% less than May 2008 which is the thirteenth month straight to show a year-on-year decline. This is undoubtedly going to impact the levels of used cars coming to market in the future which is something the industry should consider carefully in their risk and provisioning strategies. 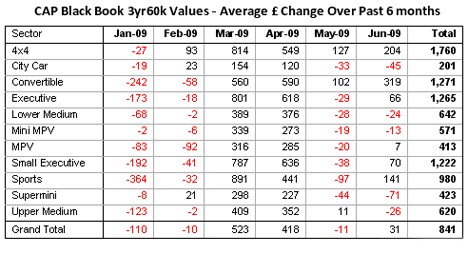