Dodge Viper SRT10 back from the dead

Chrysler Group has decided to continue to produce its Dodge Viper SRT10 after originally stating that it would cease production in December. 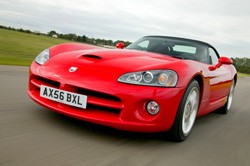 Chrysler, which is now being steered by Fiat Group chief executive Sergio Marchionne, is no longer looking to sell the Viper part of Dodge to another company.

Mike Accavitti, president and chief executive officer, Dodge brand, said: “The Dodge Viper has successfully captured the hearts and imagination of performance enthusiasts around the globe.

“We’re extremely proud that the ultimate American-built sports car with its world-class performance will live on as the iconic image leader for the Dodge brand."

Fiat has been reviewing Chrysler’s range of products and analysts believe new models for Chrysler will take at least two years to be ready for the market.