‘Seasonality’ is a word often used in the motoring sector, and often with slight but subtle differences in meaning, although its broad meaning when referring to the Used Car Market refers to the typical pattern seen in used values according to the time of year, or ‘season’.

So what is this typical pattern? When tracking a consistent age vintage such as 3yr 60,000 miles, seasonality typically features price rises in January, March and September due to the changes in year and plate, with the remainder of the year typified by varied rates of decreasing values, with the Summer months of July and August generally seeing the sharpest drops in value, closely followed by December.

It will probably come as no surprise to hear that this usual seasonality has been conspicuous by its absence this year, as the used car market adjusts to the significant changes seen over the past 12 to 18 months. Values have risen every month since March, as illustrated by chart no.1 below. 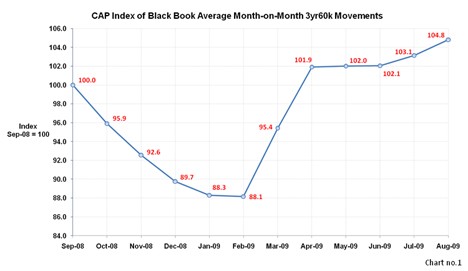 So why is this happening? Well, as with any market, there is a delicate interplay of variables at work, but key among these is just one – ‘supply’.

Current demand is outweighing available supply, and as with any ‘Supply and Demand’ economic model, an imbalance leads to a lack of what economists term ‘economic equilibrium’ and a ‘supply curve shift’; and a resulting increase in price.

To understand the changing levels of used car supply one has to consider the reasons behind the freefall in used residuals seen in the latter half of 2008.

Prior to 2009 the UK car market was over-supplied due to the short-sighted levels of self-registration, as well as significant levels of ‘short-cycle’ business – daily rental and body-shops among others.

Dealers could often find themselves losing financially on self-registrations, and the glut of sub-12 month ex short-cycle stock depressed late plate values which had a knock-on effect on older vintage values.

Add a recession to an over-supplied market and the resulting low consumer confidence, limited available credit, record fuel costs and changing VED legislation led to a decline in retail demand and significant downward pressure on residuals.

These factors combined with increasing operational losses incurred by the manufacturers because of the weak Euro – Sterling exchange rate have led to a wide-scale review of this type of business in 2009, and manufacturers have purposely pulled back from previous levels of rental business and self-registration. This has significantly reduced the numbers of ex-rental cars reaching the market and consequently the supply of late-plate vehicles which previously was such a damaging factor.

Table no.1 below illustrates exactly the resulting effect on 3yr60k used values over the past year. With an overall increase of 5.5%, when a net reduction of 5% would be the norm and with some sectors values increasing by around 12-13% the key question is - what does the future hold? Are further increases in trade value likely? 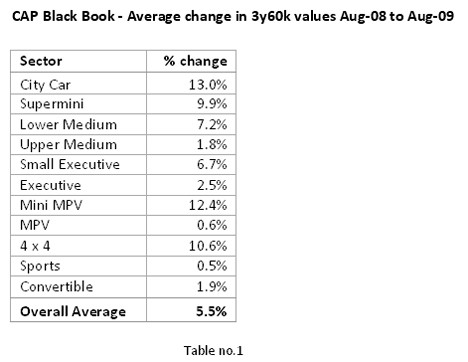 Well, the past year’s poor new car sales will lead to a reduction in used volumes in the coming years, and decisions made by leasing companies last year to extend contracts will also likely lead to a depressed future used supply. But these aren’t short-term factors. So, in the short-term the question needs to be; what will change to affect the market?

Whereas manufacturers may revisit their short-cycle strategies in the coming years this won’t affect volumes in the short-term, so the remainder of this year may very likely see a continuation of the current conditions; reduced supply, firm values with likely more increases to come, and a dealer business model (both franchised and non-franchised) that will need to adapt to what is a more realistic market.