Volkswagen has announced prices for its new Polo, which goes on sale October 16. 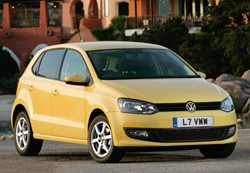 Prices start from £10,035 for the S 1.2-litre PS five door; the three-door model will be available in December.

The fifth generation Polo, which resembles the Golf, is bigger in size than its predecessor but is also lighter meaning improved fuel economy and emissions.

At launch the new Polo is available with a choice of five engines, three petrol and two diesel. These are a pair of naturally-aspirated 1.2-litre engines with 60 or 70 PS and a 1.4-litre 85 PS; plus two 1.6-litre common rail TDI units producing 75 or 90 PS.

The Polo is offered in four different trim levels and an A/C model is offered for those requiring climate control. The new range consists of S, Moda (designed to appeal to a younger audience), SE and SEL at the top of the range.

All models have standard specification including four airbags, ABS and, for the first time, ESP (Electronic Stabilisation Programme) on every Polo.