A huge deal for Citroen and its dealers, the new DS3 will see the French brand jostling for position with a dominant Mini in the luxury small car segment. 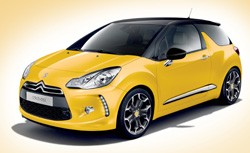 Citroen has allowed 100 customers to preorder the new model online to take delivery at the start of next year ahead of its official spring launch in the UK.

Customers that want to be one of the first to drive the car can click here to pre-order.

There will be four engines are available from launch: 1.4 VTi 95hp, 1.6 VTi 120hp, 1.6 THP 150hp and the 1.6 HDi 90hp diesel. The three petrol units are from the family of Citroën power-plants co-developed with BMW so there’s a shared heritage with the Mini there.

New Citroen managing director Gary Savage outlined the fact in the unveiling at the show the DS3 would be going for the same customers as Mini: “It will appeal to cool drivers who are looking for a car that communicates individual personality and a self-confident image.”

Citroen also revealed a new concept called Revolte which features a design reminiscent of the 2CV. The French brand could be planning a revival of an old classic following in the footsteps of the Mini and Fiat 500.

This new model hasn’t been confirmed for production but it could make a good one-two punch for Citroen’s new aspirational DS youth brand.