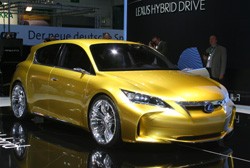 "It tells you two things," he said. "One is that we want to challenge BMW and Audi with the 1 series and A3, and two, that we are clear that hybrid technology will spread through all our product ranges."

But he added that a production version of the concept is not a done deal. "I would really like to think we could have this car for Europe but we need to evaluate the reaction we get from people at the Frankfurt Motor Show and from elsewhere."

Leroy is under no illusions about the job Lexus has to do in Europe. "Our sales have decreased 50% in the region and we need to address that. This area of the market is not where we have had a competitor in the past and it is an opportunity for us.

"That said, we don't feel we need to fight Audi or BMW but we can perhaps offer an alternative with a hybrid vehicle in this sector."

As other manufacturers announce electric vehicle plans, Toyota still plans to follow the hybrid route for the time being, Leroy added.

"It is 12 years since we launched the first Prius so we have a lot of experience in this field. At the moment hybrids are not restricted by range. We see other manufacturers introducing mild hybrids but we are focused for now on the full hybrid to serve most drivers' needs.

"Of course we have the technology for electric vehicles but first you need to have an infrastructure in place and their time will come. We are also testing fuel cell vehicles, again the technology is there but the key is getting cost down to put this into volume production. We cannot see that happening before 2020."

Toyota's stated aim is to be selling 1 million hybrids a year globally by the middle of the next decade, up from some 600,000 now. Leroy said: "In Europe we are currently selling just under 60,000 Toyota and Lexus hybrids. Next year we hope to see 70-80,000, and that is before the Auris hybrid is launched."

The Auris is due to go into production at the UK's Burnaston factory late next year and Leroy confirmed that technology will cascade into other Toyota and Lexus models.

"We have said we will have hybrid versions of all our vehicles by 2020, but beyond Auris there is, as yet, no decision on what the next vehicle will be."