At the launch of the Rover 75, BMW’s then boss, Bernd Pichetsrieder, stunned his subsidiary.

Instead of praising (or even mentioning) Rover’s best car since the original Rover 2000, he said Rover was in crisis and emergency action was required.

Now Sergio Marchionne appears to have done something similar to Alfa Romeo.

He has given an interview in which he said of Alfa’s continual promises of a rebirth: “We need to stop doing it. You cannot be a newborn Christian every four years. It’s the same religion, eventually you need to own a religion and carry it to conclusion.”

The two alternatives implied by the interview consisted of either moving the 159 and 166 replacements to Chrysler platforms, or freezing development of all new Alfa Romeos after the launch of the Giulietta (147 replacement) in 2010.

However, Fiat is now saying the comments were misunderstood: the Alfa investment plan is not due to be signed off until early 2010, so naturally no new platforms will be started until the plan is signed off.

That makes some sense, but it does not disguise the fact that Alfa Romeo is in dire straits.

In 2006, Alfa set an annual sales target of 300,000 cars by 2010. Its current production level is around half that. That is clearly not viable and puts Alfa in the same boat as Saab – a semi-premium brand with an average list price in the £15K - £20K range cannot possibly make money on those sales.

Right now, Alfa would love the 159 to be controversial – instead it is completely overlooked.

In the UK, the new Mito is helping Alfa sales rise, but from an appallingly low base.

Marchionne is a businessman and he will not sign off investment until he is confident that he can get a decent return.

He is clearly putting Alfa Romeo on notice that any proposals it tables are going to have to be a great deal more credible than anything it has presented in the last decade. 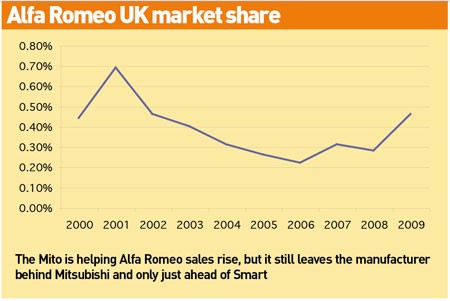