A year-end salvo of manufacturer offers, scrappage incentives and pre-VAT increase campaigning helped lift the 2009 UK new car market to almost two million units, well ahead of official forecasts made at the start of the year.

The market ended at 1,994,999 registrations, down 6.4% against 2008. However, it has been a fantastic performance from a motor retail industry which had initially predicted new car registrations to slump as low as 1.7 million.

The figures illustrate a real success story for the industry in lobbying Government. Months of negotiations with the Department of Business Innovation and Skills and the Treasury went down to the wire until the scrappage incentive scheme (SIS) was finally announced in April’s Budget.

Since SIS came into effect on May 18, it has been responsible for more than a fifth of all new car registrations, says the SMMT.

However, as AM revealed in December, the Department of Business Innovation and Skills insists SIS will cease at the end of February 2010, whether or not the £400 million Government funding is exhausted.

This has led to concerns from several dealer executives that 2010 will be a tough year.

The SMMT is currently forecasting below 1.8 million registrations, the lowest market since the early 1990s.

However, it is due to revise that forecast in the coming weeks.

It could be that SIS has simply delayed some of the pain in store for motor retailing.

Paul Everitt, SMMT chief executive, said: “Another tough year awaits the UK motor industry in 2010, with new car registrations expected to be below 2009 levels and only limited recovery in the van and heavy commercial vehicle markets.”

Everitt said there was still capacity for almost another 100,000 registrations through scrappage. “If we get close to the two million mark like we did in 2009 it will be a very good performance,” he added.

“Sustaining the progress made in the latter part of 2009 will require stronger demand from fleet and business buyers, alongside the greater availability and affordability of credit and finance.”

At the British Vehicle Rental and Leasing Association, chief executive John Lewis said he expected fleets to play their part in 2010 by increasing demand for higher specification cars.

Although 2009 saw a real slump in the business car market, which was overtaken by retail demand for the first time in 16 years, companies will come under increasing pressure to replace their existing vehicles.

Lewis added: “These vehicles will need to be replaced soon and with an economic recovery underway and firms beginning to recruit again, we expect fleet car sales to pass the million mark in 2010, providing a vital shot in the arm for
manufacturers.

“Without the taxpayer-funded scrappage scheme to support them, retail sales are set to slump dramatically this year, so it is not surprising that carmakers are already launching a charm offensive on their fleet customers in an attempt to regain share in the vital business market.”

“The scrappage scheme has tempted private buyers back into the new and used car market. This year has seen a 13.7% rise in private vehicle purchases compared to 2008. However, the business market is still fragile.”

At business adviser Deloitte, David Raistrick predicts the market will settle at just under two million units in 2011.

“Only since the late '90s have we seen annual figures over two million units which many industry experts believe was due to additional registrations being forced on the market rather than due to consumer demand.

“The long-term average for the majority of the past three decades has been less than 2 million units per annum."

“For the immediate future, it is unlikely that we will return to the heady days of the past decade when unit numbers have been more than two million.

"These numbers were unsustainable and a market correction has been expected for some time.

Ford once again proved its might, remaining the market leader for the 33rd year in succession and stretching out its dominance by 0.8 percentage points to a 15.86% share.

“2010 is set to be another year of tough trading, but Ford will continue to benefit from a flow of new models, including S-Max, Galaxy and C-Max, and the unrivalled strength of its dealer network.” 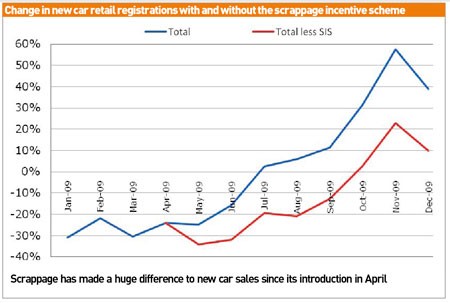