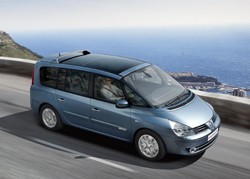 The Espace’s engine range has also been modified following the introduction of Euro V legislation. The two-litre dCi diesel is available in a choice of two power outputs: dCi 150 and dCi 175, the latter mated to a six-speed automatic transmission. The combined cycle CO2 emissions of the core dCi 150 engine has been reduced by 18g/km from 188g/km to 170g/km.

Options include an opening tailgate window for £320, bi-xenon directional headlights at £650 and a DVD system with two 16.9-inch screens integrated into the rear of the front headrests for £1,500.