Strong demand combined with lower than expected volumes resulted in average values for LCV’s rising at BCA in October. 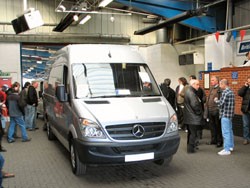 Average wholesale LCV values improved by just £33 to £4,179 in October compared to the figure of £4,146 recorded in September.

Volumes, meanwhile, dropped by around 9% - this shortage of stock is most noticeable in the corporate, volume fleet sector, although part-exchange numbers also fell during the month.

However, it is not just supply issues that are keeping prices firm – demand remains very healthy, with trade buyers being particularly active in October.

Repeating the pattern established last month, both fleet/lease and P/X values improved, while nearly-new values fell by a small margin.

P/X values improved by £21 – following a £22 increase the previous month – to reach to £2,397. This marked a second consecutive monthly rise of just under 1% and values have been steadily climbing since July.

Once again, there was some price pressure in the nearly-new market with average values falling by £297 or just over 2.1% – volumes are very small in this sector and model mix will have played a role.

Duncan Ward BCA’s general manager - commercial vehicles said: "There has been little change in market conditions over the past eight weeks as professional buyers remain active and competition for the best, ready-to-retail stock is high.

“The shortage of direct entered fleet and lease vans continues, and volumes actually fell again in October, down by some 10% month-on-month.

" With part-exchange volumes also down on the month, buyers have had to compete even harder over the past few weeks and simple supply and demand economics have seen prices climb yet again. In addition, the end-user/owner-operator remains a factor – particularly in the sub-£3,000 price band – and this is likely to continue for the foreseeable future. With cuts and redundancies in the public sector we are likely to see more and more small businesses being established in the months ahead and a used van will often be one of the first things purchased.”

He said: "Vendors should appraise stock sensibly when setting reserves to avoid delay in the remarketing cycle. We see the results every day in the auction hall where otherwise similar vehicles achieve final values often hundreds of pounds apart because of cosmetic damage that could have easily and economically been repaired.”

Year-on-year values remain ahead by £321 or 8.3% in October and average monthly values have now been over £4,000 for eleven consecutive months.