2009 was the worst year that the used car industry has seen since 2000, according to Experian.

The last time the used car industry experienced similar performance was in 2000, when 6,713,269 used cars were sold.

Sales had been falling during each quarter of the year, with the final quarter seeing a drop of 5.9% compared to the same period in 2008.

However, in comparison to Q3, sales during Q4 experienced a far greater drop - down 15.7%.

Ford and Vauxhall continue to own the lion’s share of used car sales, says Experian.

The best selling used car of Q4 2009 was the Ford Fiesta.

Second, was the Vauxhall Corsa with the Ford Focus and Vauxhall Astra taking third and fourth place respectively.

BMW was the only manufacturer to see a rise in sales across all used models for the year as a whole.

Kirk Fletcher, managing director of Experian Business Information and Automotive, said: “The recession and the scrappage scheme have had a big impact on the used car market.

“Consumers who would have normally bought a used car were now considering a cheaper new car through the scrappage scheme.

"This resulted in smaller new cars moving into a price range that had previously been occupied by used cars.

“The scrappage scheme has also affected the number of used cars available for sale.

"Normally, when a new car is bought, a used car inevitably comes onto the market.

"However, with the scrappage scheme, the part exchange vehicles have been scrapped.

“Furthermore, the recession has resulted in people holding onto their cars for longer, which has also affected the choice of used cars on the market.

“The scrappage scheme is coming to an end, but value for money will remain at the forefront of consumer’s minds, which means that they could relax their criteria and seek out older, lower priced vehicles.

"This will bode well for dealers that adapt their stock profile policies and extend the age profile, remove previous owner limitations and relax the mileage limits of their used cars to ensure they have a healthy supply of used vehicles to retail.”

Segment
Sales of the used cars in the mini segment, such as the Fiat Seicento and the Chevrolet Matiz, saw the biggest drop in 2009 (9.1%).

Upper medium, which includes the BMW 3 series and the Ford Mondeo, fared the worst when compared with Q4 2008, seeing a drop of 10.3%.

When comparing Q4 sales to the previous quarter, specialist sports, such as the Audi TT and the Mazda MX-5, came off the worst with a 23.2% decrease.

This was in contrast to the year-on-year results where the specialist sports segment was the only sector to see an increase in sales - 5.7% higher than Q4 2008.

As in 2008, the best selling segment for 2009 was the supermini, which includes the Ford Fiesta and the Vauxhall Corsa.

Although the majority of used cars being sold are still petrol run, it is the only fuel type to see a drop in sales during 2009 as a whole, with an 8.7% fall compared to 2008.

Age
With the boost in new car sales due to the scrappage scheme, the 0-3 year old cars have suffered the most with sales dropping by 15.4% when compared with Q4 2008.

Cars over nine years old were the only age group to see any form of increase, albeit a marginal 0.4% improvement on Q4 2008 figures. 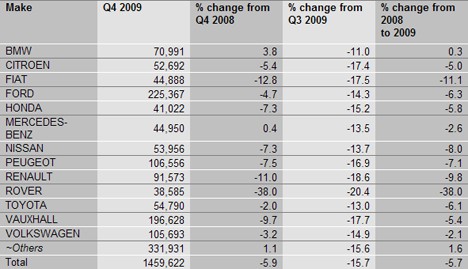