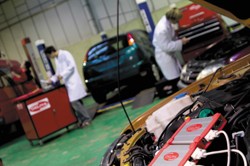 In a comprehensive upgrade, the EU Council of Ministers agreed "modern electronic systems be included in the list of items to be tested."

This change and others will amend directive 2009/40/EC on minimum standards for roadworthiness tests – most have to be introduced by December 2011.

The changes will not yet involve a compulsory electronic diagnostic, with testers plugging into a car’s systems and checking computing functions and micro-chips, but RMI MoT chairman John Ball says this will come eventually: “Electronic systems will have to be tested at some point”.

Although he could not put a figure on this – these changes would increase the cost of the MoT, Ball predicted.

“The previously total mechanical functions now driven by electronics in today’s vehicles are growing and becoming common place (eg: steering/throttle/brakes/suspension). This is in addition to safety/emission systems.”

“How we will test such items is being debated…but it will inevitably mean diagnostic testing with new specialised equipment. This will be a sea change from the current test regimes which are fundamentally ‘touch and observe’ apart from emissions and brake test.”

The current and expected future reforms’ impact will however be much larger in some other EU countries, he suggested, particularly in eastern and southern Europe.

The changes make the minimum standards considerably more comprehensive to ensure dangerous vehicles do not ply the highways of Europe.

As a result, ministers have agreed that:

Ball said any possible future proposals for mutual recognition of such certificates would be treated with caution. “Until we are satisfied that a minimum test standard has been well established across all states as has compliance, RMI would oppose it,” he said.