Tesla Motors and Toyota Motors have announced their intention to cooperate on the development of electric vehicles, parts, production and engineering. 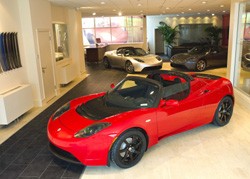 Toyota will take a $50 million stake in Tesla once it completes its planned US stock market flotation.

The two companies intend to form a team of specialists to work on electric vehicles.

Toyota president Akio Toyoda said: “I sensed the great potential of Tesla’s technology and was impressed by its dedication to monozukuri (Toyota’s approach to manufacturing.
“Through this partnership, by working together with a venture business such as Tesla, Toyota would like to learn from the challenging spirit, quick decision-making, and flexibility that Tesla has. Decades ago, Toyota was also born as a venture business. By partnering with Tesla, my hope is that all Toyota employees will recall that ‘venture business spirit,’ and take on the challenges of the future.”

Late last year, Toyota started leasing Prius Plug-in Hybrids, which can be charged using an external power source like a household electric power outlet. The company also plans to introduce electric vehicles into the market by 2012.

Tesla’s goal is to produce “increasingly affordable” electric cars to mainstream buyers. California-based Tesla is currently the only carmaker in the US that builds and sells highway-capable electric vehicles in serial production.

Tesla employs a team of “service rangers” that travel to customers’ houses to do check ups and service repairs.