The March sales figures showed the highest ever penetration for city cars – an amazing 11.6% market share for the first quarter of 2010.

Indeed, the industry will be fervently hoping that figure is the highest forever.

When more than one in 10 buyers choose something in this class, you know the market is seriously ill and being treated with special drugs.

In fact the three smallest segments had a good first quarter (see table). Even lower medium, which was vulnerable to increasing sales of superminis, did reasonably well.

As the market inches back to normality, lower medium should steadily increase share.

This will be especially true when the new Focus goes on sale at the start of next year.

Obviously, it has been harmed by the move towards smaller cars caused by the scrappage incentives, but that is not the whole story: after all, the executive segment has actually increased share.

The bigger question for the upper medium segment is what it is for? Now that its products are bigger than a 1980s Ford Granada and its customers are tempted by lower medium models, MPVs, off-roaders and almost every other emerging part of the car market, one has to wonder what their long-term future is.

Ford has neatly side-stepped the issue by creating a common family of Mondeo, S-Max and Galaxy, but other manufacturers still need to figure out a solution (clue: as the Peugeot 407 and Renault Laguna have proved, it is not in the shape of a coupé).

Most of the smaller segments have done reasonably well.

At the start of the recession, it looked like off-road might go the way of the dinosaur, but it has re-invented itself as the off-road silhouette segment.

Sales are being supported by models in the shape of off-roaders, but with no actual off-road ability beyond having an extra couple of inches of ground clearance on a rough track: the share of 2wd versions has gone up from 4.7% in Q1, 2009 to 12.9% in Q1, 2010.

However, it should be said that Land Rover is back: it has taken three of the top five places in this segment so far this year. Not everyone wants to lose the off-road heritage.

At the top of the market, both executive and luxury saloons have surprising growth figures: is that the famous “bonus culture” of high earners making its presence felt? 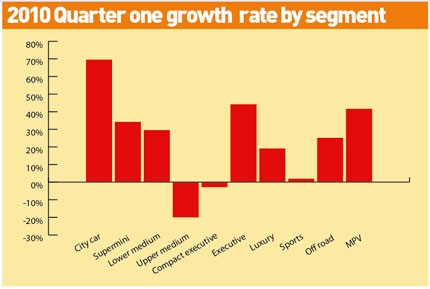