Citroen’s DS3 Racing model will be available to order from September 1 priced from £23,100. 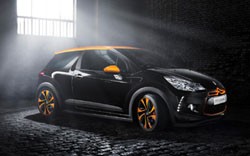 Developed by Citroen Racing, the team behind five WRC manufacturer’s titles and six driver titles, the hot DS3 has a tuned 1.6-litre THP engine which produces 207bhp. The DS3 Racing will hit 0-62mph in 6.5 seconds and will go on to a top speed of 146mph.

The new model is based on the top-of-the-range DS3 DSport THP 150, but includes carbon fibre components such as the rear diffuser, front bumper, side rubbing strips and wheel arch extensions. The interior features a revised centre console, steering wheel and door inserts.

Citroën has confirmed that 200 RHD cars will come to the UK and the company has already had 1,500 enquiries through its website.