The IS range has undergone its most significant changes since launch says Lexus.

Changes for the 2011 model year, to be formally revealed at the Paris Motor Show next month, include the introduction of the new IS 200d, a 148bhp version of the 2.2-litre unit with improved fuel economy, lower emissions and reduced tax bills.

This means a lower VED charge – band E rather than F. For company car tax payers there is a further bonus in the reduction of the benefit-in-kind tax rating from 21 to 18 per cent for the new model. 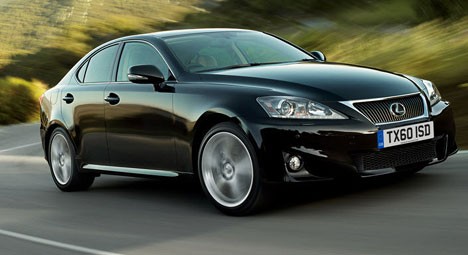 The V6 petrol engine featured in the IS 250 and IS 250C coupe-convertible with six-speed automatic transmission has also been revised to meet future Euro V emissions standards, achieving better fuel economy and CO2 emissions with no loss of performance.

All IS models equipped with high-intensity discharge (HID) headlights gain LED daytime running lights and across the range there are new wheel designs, new rear light designs and a revised choice of exterior colours.

For the 2011 model year the IS 250 becomes and automatic-only model, with revisions to the powertrain that meet Euro V emissions standards.

Similarly, the improved engine is also under the bonnet of the 2011 IS 250C coupe-cabriolet, with an improvement in combined cycle performance to 30.7mpg and a 6g/km reduction in CO2 emissions to 213g/km.

The new-design 18-inch alloy wheels have a dark silver finish and black centre Lexus roundel, directly inspired by the IS F.

Inside there’s an F-Sport steering wheel, gear lever and sports pedals and front seats finished in leather and Alcantara. Extra touches of titanium-effect trim and a dark, anthracite roof liner are also introduced.

Revisions elsewhere in the IS range included improvements to the SE-I specification to introduce rain-sensing wipers, an auto-dimming electrochromic rear view mirror and a new leather upholstery with heated front seats.

There is a modest change to the rear light clusters and on IS 250 the exhaust tailpipe has a bolder circular profile in place of the previous ellipse.

New-look 17 and 18-inch wheels are available and the choice of exterior colours has been adjusted, with Ultra Blue metallic making its debut in the range.