BCA’s latest Pulse report shows that July’s overall volumes, model mix and demand levels were similar to those in June.

For the second month running, a relatively rich mix of cars has disguised some of the pressures in the marketplace and conversion rates remain fragile.

Year-on-year values were behind for the third month running, by £244 – the largest ‘negative’ variance seen this year – compared to the July 2009 figure of £6,028 (the first time on record that average values had breached the £6K ‘watershed’).

However, values are ahead compared to two years ago – July 2008 saw average values tumble to £4,949 – nearly, but not quite the lowest point they reached.

BCA communications director Tony Gannon said: “Prices have continued to be under some pressure in July, especially in the fleet and lease sector.

But sales volumes have held up well in the month and demand is there for vehicles that are valued in line with their condition and market expectations.

Although we have not experienced seasonal patterns in the market for some time, we are seeing them now and should expect these to continue over the rest of this year.” 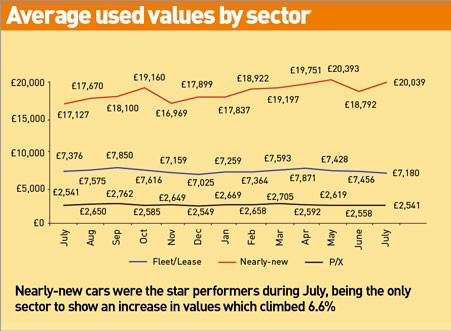