Ford Retail is supporting charity ‘Boots for Africa’ which sends second-hand football boots out to children in Africa. 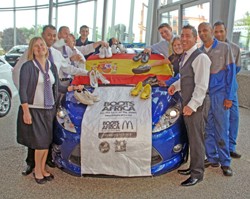 The group has 47 UK dealerships which are acting as collection points for football boots to be handed in by the general public.

Ford Retail has also donated a Transit van to the charity for it to use in collecting boots from sites all around the UK.

Hundreds of boots have so far been collected by the dealerships which trade as Dagenham Motors, Polar Ford, Heartlands Ford and Brunel Ford.

Regional director Jim Higgins, with responsibility for the company’s corporate social responsibility programmes, said: “Boots for Africa is such a simple idea and a very worthwhile cause which will give poor kids in Africa so much enjoyment from owning their first ever pair of football boots.

“We’re really behind the campaign and expect to collect many hundreds of unwanted boots by the time the campaign finishes at the end of August.”