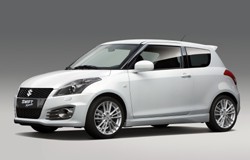 Suzuki has served legal notice on Volkswagen to remedy what it believes to be “numerous breaches” of the companies’ partnership following a dispute about the sharing of technology.

VW has taken issue with Suzuki signing a deal with Fiat to supply its 1.6-litre Multijet II diesel engine for the SX4 instead of using VW engines. Suzuki has denied that the deal has broken its agreement with VW and wants the German manufacturer to “return Suzuki’s shares”.

The partnership was made to give VW access to Suzuki's significant market share in India. Suzuki would then gain access to some of VW's engineering prowess in return.

Suzuki says the notice follows “a period of prolonged efforts by Suzuki to progress its relationship with VW, as agreed at the partnership's inception”.

“I remain disappointed that we have not received what we were promised. If Volkswagen will not allow access it must return Suzuki's shares. We are very encouraged by Suzuki's consistently solid performance.

“We remain on track for profitability and are excited about the potential for future growth."