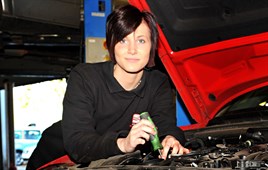 Faye Gates has joined AM Award-winning Grants Seat as its latest motor technician but had faced difficulties entering into the industry when she applied at other garages.

A former student at the Colchester Institute College, Gates said she was “blocked by sexism and ignorance” on the way to her dream career and received numerous rejections from garages after being told ‘we don’t employ women in our workshop’, ‘you’d be better suited to a job on reception’ and ‘we just don’t have the facilities for women’.

Grants Seat read about Gates’ story in the Braintree and Witham Times and offered her a trial and then took her on full-time.

Gates has now been enrolled on the Seat Advanced Apprenticeship Programme and has ambitions to become a master technician.

Gates said: “I’ve wanted to be a technician since I was about 14 when I started hanging about with people who were really into their cars, but I was beginning to give up hope of ever finding an apprenticeship.

“I sent out so many CVs and got nowhere, and people were often really blatant about the reasons why they didn’t want to hire me.

“On one occasion I was told by a garage that they had no vacancies – only to discover they’d given an apprenticeship to one of my classmates at college a few days later.”

Darren Williams, Grants Seat managing director, said: “It absolutely beggars belief to hear some of the comments made to Faye as she tried to pursue her career.

“The reasons people gave for not employing her would have been totally unacceptable decades ago but in this day and age they’re simply outrageous.

“We were very happy to give Faye a shot after reading her story in the Times but giving her a job was no sympathy vote – she earned it. She was really impressive on her trial and, since joining the team, her enthusiasm and willingness to learn have really shone through.

“Now she’s started her training proper on an industry-leading apprenticeship programme I’m sure she has a very bright future.”