Buying trends: Is the UK the Germans' third home market?

VW likes to talk about China as its second home market, thanks to its vast local presence there.

Any photograph of a busy Chinese street is likely to show bumper-to-bumper rows of VW Santanas, the Passat-based saloon last seen in Europe in the 1980s.

While Britain is never going to absorb the sort of numbers the Germans can shift in China, its car market is starting to look like Germany’s third home market.

At the time of the Volvo sell-off in early 2010, it was noted that if all the VW sub-brands were counted together, the VW Group was market leader in the UK, just ahead of Ford.

Today that statistic already looks rather quaint: VW Group products now take 19.5% of UK sales (excluding Porsche which has yet to be officially consolidated within the group), meaning sales are 40% ahead of Ford.

Of that, 25.3% comes from the four German brands (VW, Audi, BMW, Mercedes), with the balance coming from VW’s subsidiaries, Seat and Skoda, plus of course BMW’s Mini.

A comparison of the top 10 manufacturers in the same period 10 years ago with today shows the massive advances the German companies have made – and they were not exactly weak then.

Back in 2001, VW was in fourth place, sandwiched between Peugeot (then with a UK manufacturing presence) and Renault. None of the three premium brands was even in the top 10.

Today, VW is up to number three, while Audi and BMW are in fourth and fifth place respectively, and Mercedes is in eight place.

Renault is no longer in the top 10 at all.

While it is hard to see the premium brands growing much further – after all, you can’t get higher than fourth place and still be considered premium in any meaningful sense – the same cannot be said of VW.

The company has always been massively strong in the lower medium segment, thanks to the Golf, but it has steadily worked out from there into other segments.

The Passat is now the second best-selling upper medium model, while the new Polo is up to number three in the supermini segment.

One big opportunity is in city cars. If VW could sell 9,600 of its lame, thirsty Fox in 2010, one wonders how many of the Up can it sell.

Indeed is the name simply a reference to VW’s super-ambitious sales targets?

Is VW poised to become the first non-domestic brand to take 10% of the UK market? You would not bet against it. 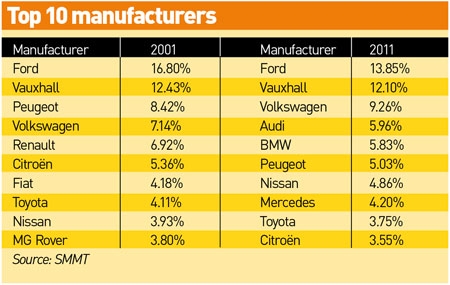