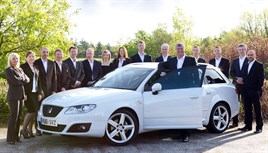 Seat has doubled the size of its fleet and business sales team taking it from four to eight.

Seat believes the expansion of the team is a clear indication of its intentions to raise the brand’s profile in the fleet business sector.

In the year to date (end of November) Seat has sold 17,946 cars in the fleet sector according to SMMT figures, a record share of 1.9% for the Spanish company.

Steve Robertson, Seat head of fleet, said: "Investing in a major expansion of the fleet team in the way that we have should leave no one in any doubt how committed we are to our goals in this area of the market.

“Becoming well-known not just for our products and our value is just the start: I want Seat to be seen as the company that’s also the easiest to do business with."