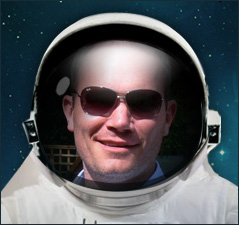 Marshall Motor Group’s head of digital Richard Fuller has made it into a shortlist of 15 for the chance to fly into space.

Cambridge-based Red Gate Software launched a competition open to IT database administrators from the UK, USA, Australia, Canada and Germany, which would give one person the chance to go into suborbital space.

Fuller made it into the final 15 shortlist after answering 14 online video questions and was then selected based on what he would tweet from space, which includes a reference to Stanley Kubrik’s 2001 A Space Odyssey.

His tweet was: “Bloody boring up here: space toilet's broken and now the computer's playing up. It keeps saying 'I'm sorry, Dave, I can't do that!' #RedGate”

A winner will be chosen based on the number of public votes on gained on https://www.dbainspace.com/finalists/richard-fuller between now and December 13 and the views of a panel of judges.

The suborbital flight into space is being organised by Space Adventures which is the world’s first private space flight company.

It offers a variety of programs such as the availability of spaceflight missions to the International Space Station and around the moon, zero-gravity flights, cosmonaut training, spaceflight qualification programs and reservations on future suborbital spacecraft.