Kia Motors has revealed the first photos of its next generation Rio, to be unveiled at Geneva Motor Show on March 1 alongside the new Picanto. 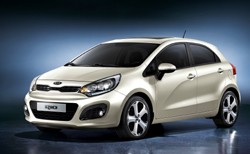 The Rio has been in desperate need of a facelift to bring it line with the rest of the Kia range.

The Rio will be on sale in the UK from September as a five-door version and a three-door will be available from early 2012. Pricing and full range details will be announced nearer the on-sale date.

Kia’s B-segment newcomer will be offered with a 1.1-litre diesel engine generating 68bhp, with CO2 emissions from as low as 85 g/km. An new, high-performance 1.2-litre turbo petrol will also be available from 2012. 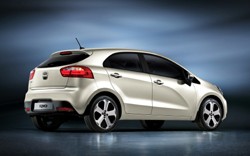 “The Rio has always been successful, and with this new incarnation we have a car that people will want to buy for its looks.”

Since its launch in 2005, global sales of the current-generation Rio have totalled more than 860,000 units. It was the company’s third best-selling vehicle in overseas markets during 2010 with sales of more than 219,000 units. UK sales from launch total 52,626 units.