The part-exchange sector climbed for the third month running even as sold volumes increased by some 83% over the month.

The nearly-new sector saw values fall sharply, as sold volumes almost doubled between December and January to lead average values to drop from £21,691 to £17,619.

The fall in nearly-new values, combined with the much-changed model mix over the month had the net effect of slowing the growth in the overall average value.

BCA’s communications director Tony Gannon said it was no real surprise to see values strengthen in the January to Easter period.

However, volume will strengthen from late March and the Easter week and Royal Wedding will effectively disrupt a week of trading.

“This is a particularly important consideration for volume sellers which could see demand slowing, just when volumes are rising.” 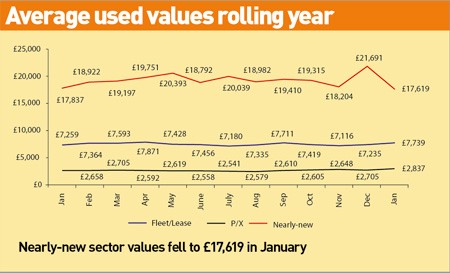