Kia dealers across the UK are getting involved in charity fund raising for Red Nose Day as 28 dealerships look to “pimp” 32 part-exchange vehicles into something good enough to raise money at auction on March 18. 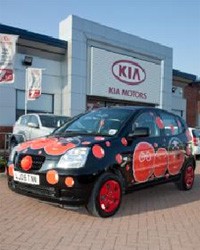 The 2011 Pimp My Part-Ex will see the service department of participating dealers working with the sales team to turn the part exchange cars into something that will raise money at auction.

The end results will go under the hammer at the British Car Auctions (BCA) centre at Measham, with the difference between the stand in value of the car and the final auction sale price going to Comic Relief.

Vehicles set to take part in the fundraising efforts include three Kia Rio’s and one Kia Picanto, as well as Ford Ka’s, Renault Megane’s and an MG MGF amongst others.

Bolton Kia‘s effort will see an old Picanto transformed into a red nose emblazoned design, complete with red alloy wheel trims. All cars are will hold a valid MoT and road licence.

David Hart, Kia Motors UK dealer marketing manager, said: “Red Nose Day is all about a positive change through the power of entertainment, and Kia Motors UK is looking forward to embracing this mission with our Pimp My Part-Ex charity auction.

“In 2009 the company raised over £7,000 in this way for Comic Relief and this year we’re aiming to blow that amount out of the water, as well as have a lot of fun in the process.”