For most of the last 25 years, engines have been getting bigger and more powerful.

The fact that eng-ines have started to get both smaller and more powerful is a testament to increasing efficiency.

Over the last 15 years specific power output (measured by bhp per litre) has been improving by slightly more than one bhp every year.

That is the fastest rise ever seen in the car industry, which is quite an achievement.

Not many industries increase their rate of improvement after 100 years.

Nor is the rate of improvement likely to slacken any time soon.

Apart from economy models, petrol engines now have 100bhp per litre firmly in their sights – a target already passed by leaders like the VW TSI and Fiat Multiair.

Ford has announced the first details of its forthcoming 1.0-litre three-cylinder engine.

While final power figures have not been announced, it is thought that the test engines were happily producing 100bhp – 120bhp.

This rate of progress means petrol engines of more than 2.0-litres will become obsolete for mainstream
cars in the UK, although some European markets like Scandinavia and Switzerland show a dogged preference for large petrol engines.

Should we mourn the passing of the traditional six or eight cylinder petrols? Not necessarily.

Can you imagine Ford putting two of its new engines together to make a 2.0 V6 with 250bhp plus, with an exhaust tuned to sound like the old Alfa Romeo 3.0? That would soon address any nostalgia for “traditional” petrol engines.

And what of diesel engines?

At present the specific power output of the average diesel is identical to that of petrol at 74bhp/litre.

However, diesel has had its revolution, with the introduction of common rail, turbocharged direct-injection engines.

From now on, improvements are likely to be incremental, while petrol moves ahead with its revolution of downsizing, turbocharging and variable valve timing.

While diesel will stay as the default choice for any mainstream car above the Golf/Focus class, petrol will nibble into its share in the mid-market.

That is only natural: if petrol increases its efficiency more quickly than diesel, it is bound to reap the rewards. 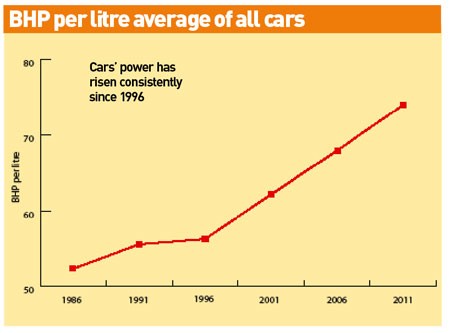