Kia will launch a three door version of its Kia Picanto in the UK on September 1 in time for the plate change priced from £7,795. 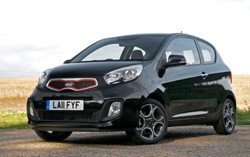 It’s the first time the Korean brand has had a three-door version since the model appeared in 2004.

Kia has added a three door version due to the growing size of the three-door A segment market in Europe. Globally, the market for Picanto-sized cars in 2014 will be around 2.4 million. By 2015 – well within the second-generation Picanto’s life cycle – that will have grown to 3.3 million. Around a million of these will be three-door cars. Without a three-door model, Kia would have nothing to offer 30% of buyers.

In the UK, the importance of the three-door car is even more pronounced: the sales split between body styles in the A-segment is a slender 55:45 in favour of five-door models.
The three-door Picanto has its own colour schemes and trim structure that reflect its role as the sportier model in the range.

The entry-level model – badged Picanto 1 or, with air conditioning, Picanto 1 Air – comes with all-black upholstery. Above that, the models are called Halo and Equinox rather than 2 and 3. Halo has black and grey interior trim, while Equinox is finished in ‘chilli’ red.

Depending on engine and trim combination, there is a choice of four exterior colours, and alloy wheels are standard on all but ‘1’ and ‘1 Air’ grade cars.

The three-door Picanto offers new 1.0- and 1.25-litre petrol engines, which deliver fuel economy of up to 67.3mpg with CO2 emissions as low as 99g/km.