VW reveals more Up city car details ahead of Frankfurt

Volkswagen has revealed a first look at the production version of its new Up city car.
The new model will make its debut at the Frankfurt Motor Show next month and will go on sale in the UK in December. 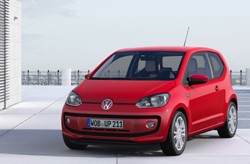 There will be three versions of the Up for different budgets. Take Up is the entry-level car, Move Up is the mid-range model and High Up is the top spec version.

At the car’s market launch, there will also be two models based on the High Up: Up Black and Up White.

The Up will feature a new generation of three-cylinder petrol engines with 58bhp and 73bhp power outputs. VW’s BlueMotion technology will be available on the Up with CO2 emissions emitting less than 100g/km. There are also plans for an electric version.

City Emergency Braking (CEB) will be available as an option. The system is automatically active at speeds under 18mph, and uses a laser sensor to detect the risk of an impending collision. Depending on speed and situation, CEB can initiate automatic braking. 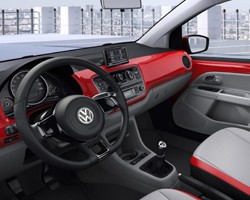 The Up will also feature VW’s “maps + more” system which is a mobile personal infotainment device which organises navigation, telephone, information and entertainment. Customers can snap the PID into place above the centre console and VW will be releasing apps that can be used on the touchscreen device.

Prices and more details will be revealed closer to the Up’s launch in the UK in December.