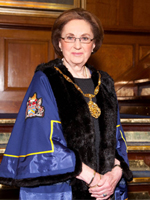 Blue Bell BMW group managing director, Sue Brownson OBE, has been elected ‘Master of the Coach & Coach Harness Makers’, becoming the first ever female to hold the position with The Worshipful Company of Coachmakers and Coach Harness Makers of London.

Sue Brownson has joined a list of previous ‘Masters’ dating back to 1677. The official ceremony took place at The Tallow Chandlers on September 1 and Brownson will enjoy her historic position as ‘Master of the Coachmakers’ for the next year.

The Coachmakers’ Company is a charitable association, which traditionally supports the heritage of coach and coach harness making, and today promotes excellence in the modern automotive, aerospace and rail industries.

Together with her husband, group chairman Chistopher Brownson, Brownson heads up the Blue Bell Group, which includes four BMW and Mini dealerships in Wilmslow and Crewe as well as a group bodyshop in Wilmslow.

Brownson will become involved with The Coachmakers’ Company’s charitable work, which sees donations made towards training in the automotive and aerospace industries, and educational bursaries granted to students studying Motor Vehicle Design at the Royal College of Art.

Brownson said: “I am extremely honoured to become ‘Master of The Worshipful Company of Coachmakers and Coach Harness Makers of London’.

“It has a wealth of heritage, and I am delighted to be involved with a company that promotes excellence within the automotive, aerospace and rail industries, as well as providing essential support to emerging talent within the sector. I was nervous at the official ceremony, but I am now looking forward to contributing to the excellent work of The Coachmakers’ Company over the next year.”