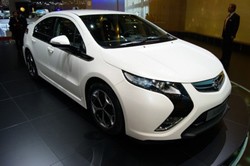 Vauxhall has been cleared by the advertising watchdog after it investigated a promotion for the new Ampera.

An automotive blogger asked the Advertising Standards Authority to challenge claims in an advert on Vauxhall's website which stated that under normal driving conditions where 80% of daily journeys are less than 30 miles, the combination of battery power and extended range technology deliver up to 175 miles per gallon of fuel, and suggested the claim that the car could emit less than 40 g/km of CO2 was misleading because he understood the claim did not take into account emissions from electricity used to power the car.

Both challenges were thrown out by the ASA after its investigation.

After considering evidence submitted by General Motors UK, the ASA noted that the 175mpg claim had been calculated in accordance with European regulations.

It also noted that the claim clearly stated that the fuel consumption was calculated in conditions where daily journeys were less than 30 miles, and as a combination of battery power and extended range technology.

"We therefore considered that readers would be aware that the claim included distance travelled using both petrol and electricity, and were unlikely to be misled."

On the emissions claim, the ASA acknowledged that there would be emissions from electricity in powering the Ampera, but noted there was no industry or agreed standard to measure those emissions, and noted that General Motors had submitted all available emissions information for the Ampera in the course of the investigation, and had given specific context to their emissions claims for the Ampera.

"The ad clearly stated 'Under normal driving conditions' and we considered that in that context readers would be aware the ad was referring to CO2 emissions that were emitted only when the car was being driven. We therefore considered the claim had been substantiated and was not misleading," said the ASA.