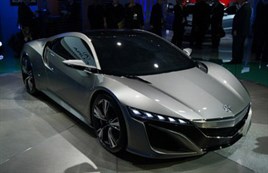 Honda will launch its NSX supercar in Europe in 2014.

The Japanese brand revealed the new concept model at the Detroit Motor Show and Honda CEO Takanobu Ito said the production version will be very similar to concept.

The new model will be developed by the company's engineering teams in the US and built at its plant in Ohio for all markets.

Like the previous NSX, it will have a mid-mounted V6 engine, this time with direct fuel injection, to drive the rear wheels, but also two electric motors mounted at the front to give it all-wheel drive.

Honda calls the system SH-AWD (Super Handling All Wheel Drive), and it can adjust the torque sent to each end on demand, driving through a twin-clutch paddle-shift transmission with built-in electric motor.

As with the previous NSX, it will not necessarily aim to be the most powerful supercar around, but will instead focus on performance through ‘engineering efficiency and light weight,' says Ito.

It will go on sale first in the US under Honda's Acura luxury sub-brand, and will come to Europe a little later - probably sometime in 2014 - as a Honda.

The car will be shown at the Geneva Motor Show in March wearing Honda badges.