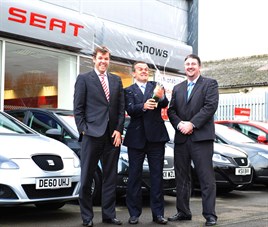 Snows Group is preparing to open its fifth Seat dealership with a showroom in Salisbury as it celebrates 20 years with the Spanish brand.

The group, based in the south of England, has been with Seat since December 1991 at a site in Southampton.

The group also has Seat sites in Portsmouth, Poole and the Isle of Wight.

Stephen Snow, Snows Group chairman, said: "Over the past two decades we’ve worked hand-in-hand with Seat and have developed together, building great friendships with our growing number of customers along the way.

“During that time we’ve seen the SEAT range get better and better and, having had a glimpse into its future, I have to say the future looks awesome.”

He said: “During my time at Seat Snows Group has consistently been one of our most enthusiastic partners and effective performers.

‘The Seat brand has gone from strength-to-strength in recent years and now commands its greatest ever share of the UK car market. Much of that success is, of course, down to the quality of the vehicles we offer, but so much is also due to the outstanding contribution of dealers such as Snows.

‘I’d like to thank them personally for the important role they have played in helping us build Seat into the exciting brand it is today and I look forward to working with them as we gear up for one of the most thrilling periods in the company’s history.”