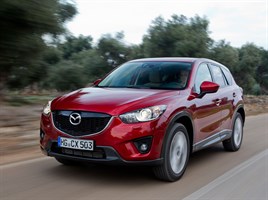 Orders for Mazda's CX-5 crossover are running at three or four times the expected rate in Japan while Europe has 15,000 back orders, including around 1,000 in the UK.

Jeff Guyton, head of Mazda Europe, said that annual CX-5 capacity was 160,000. "We're looking to stretch that to 200,000 this year and will probably need to increase that for next year."

The European backlog is equivalent to four ship loads of cars and is not expected to be cleared until February.
The good news for Mazda and its bank balance is that the CX-5 is a more profitable car than the CX-7 because production costs have been reduced through the introduction of SKYACTIV technologies- all engines from a 1.3-litre petrol to a 2.2-litre diesel are built on the same line, for example.

"This way we get greater economies of scale," said Guyton.

It also means that Mazda is on track to report a profit this year after four years of losses.

The Japanese brand revealed its new Mazda6 saloon at the Paris Motor Show last week which will go on sale at the start of 2013.

Guyton said: "The new Mazda6 is a more profitable and more competitive car for us than the outgoing car. We have an automatic diesel for the first time in this sector which allows us to be much more competitive."

Mazda saw its UK market share drop to 1.16% last year and dealers will be looking to new product to renew interest in the brand.

AM Poll
What is your take on the car retail sector's ongoing vehicle supply shortages? Please leave a comment
Vote
View all
4105