Profits up at Vertu Motors for first half of 2012 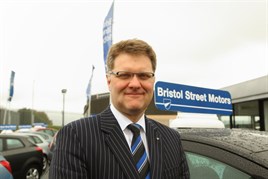 The results exceeded analyst adjusted PBT forecasts by 11%, with a 16.3% increase to £5m.

Robert Forrester, Vertu chief executive, said: “I am delighted to report that the group has delivered an excellent profit performance for the first half of the financial year with strong growth compared to the prior year.

“Market conditions have improved and this is reflected in higher sales volumes in both new and used cars.”

Forrester said the group’s aftersales strategies are now consistently delivering growth of revenues and profits and the sites that have been acquired are now delivering growth and improving returns.
He said: “We have acquired a further 10 outlets and we now operate 86 sales outlets from 70 dealership locations.

“With our strong balance sheet, the group continues to execute its growth strategy and further acquisition opportunities are being actively progressed.

“This, coupled with the turnaround strategy that we implement following the acquisition of new businesses, will continue to underpin shareholder value growth.”

Used car volumes were up by 7.5% with gross profit per unit remaining above £1,000. Vertu has benefitted from expanding the number of used car buyers that work across the business which has aided the sourcing of stock.

New car volumes were up by 7.9%, excluding Motability which saw an 8% drop in revenues due to "lower applications".

Gross profit per unit on new cars was down slightly, but sits at £941.

Fleet and commercial volumes increased by 14% during the period and aftersales also delivered 4.1% growth rate in volumes despite an ongoing falling car parc, with service revenues more than offsetting weakness in accident repairs and parts.

Encouragingly acquisitions made in 2012 made a positive contribution, with acquisitions made this year making a small loss as expected. There were also a couple of closures that marginally diluted the bottom line, as management continue to seek to optimise the group portfolio and lower its fixed cost base where possible.

Used car supply was one of the areas the business was most worried about when putting its business plan together for 2013.

As a result, the amount of full time staff used car buyers the group employs doubled from two to four. The buyers split focus regionally and nationally across the UK.

The top priority for the group is making sure it has the management capacity in place to successfully turn around its acquisitions.

Vertu sends 20 members on staff each year to develop them into managers for the future. The group now has a pool of 80 people ready to run after running the programme for four years.

The business will continue to pursue its strategy of acquiring businesses, but Forrester dismissed the intention of aiming to have the largest dealer group in the UK.

He said: “It’s not about the end game for me, it’s about the journey. We’re going to be around in five years and I hope 15 years’ time too.

“We are enjoying the business and working in this industry.” The focus will be to continue to deliver growth for shareholders, rather than reach a specific number of dealerships across the UK.

Forrester believes the second half of this year will see new car retail volumes increase and the group will look to integrate the 10 acquisitions it has made since May.

Vertu installs its IT systems and process within a new business “overnight” but Forrester believes it may take between four and five years before they can generate a return for the group.

Forrester said: “We’ve got to continue the momentum we have already generated so far this year.”

“The key driver behind this was its performance in used cars as it clearly outperformed the industry on volume, gross profit per unit and return on investment.

“The other divisions in the group also delivered solid YOY improvements, with the integration and progress of previous acquisitions continuing to go to plan.”