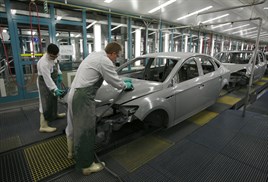 Ford has entered into a consultation process on a plan to close its Genk factory in Belgium as it looks to right size production as sales continue to slow down across Europe.

The brand is proposing to close the Genk plant at the end of 2014 which could result in the transfer of the next-generation Ford Mondeo, S-Max and Galaxy to Ford’s Valencia Plant in Spain. Pending further study, production of the C-Max and Grand C-Max could move from Valencia to Saarlouis, Germany, in 2014.

Ford believes the plan will help to address manufacturing overcapacity stemming from more than 20% drop in total industry vehicle demand in Western Europe since 2007.

New vehicle sales in the region have reached a nearly 20-year low this year and are expected to remain flat or fall further next year.

Stephen Odell, chairman and CEO, Ford of Europe, said: “The proposed restructuring of our European manufacturing operations is a fundamental part of our plan to strengthen Ford’s business in Europe and to return to profitable growth.

“We understand the impact this potential action would have on our work force in Genk, their families, our suppliers and the local communities. We fully recognise and accept our social responsibilities in this difficult situation and, if the restructuring plan is confirmed, we will ensure that we put in place measures and support to lessen the impact for all employees affected.”

Ford first revealed towards the end of September that it was looking to restructure its European operations.