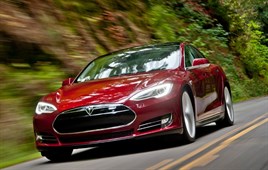 Tesla has unveiled a pure electric, executive saloon called the Model S, which has a range of 300 miles on a single charge and a 0-60mph time of 4.4 seconds via the 416bhp electric motor.

The range is three times more than the 100 mile range currently offered by other EV manufacturers. There will also be an entry level model which has a range of 160 miles.

The Model S uses a new platform developed in-house that is laid out like a skateboard and houses a flat lithium-ion battery under the floor of the car which powers a compact electric drivetrain between the rear wheels.

The new model was unveiled in Europe to journalists this week and the Model S features a 150 litre boot under the hood and 744 litres of space in the rear boot too. There's also a large 17-inch tablet style computer in the dash which drivers can use to browse the internet with built in 3G.

According to AM-sister title Fleet News a right hand drive version will be available in the UK towards the end of next year and it’s expected to be priced to compete against its conventionally powered rivals.

The American manufacturer has already received 13,000 pre-orders for the left-hand version, and it’s looking to produce 20,000 units in its first year of production.

Prices are expected to be around £85,000 when it goes on sale next year. Tesla does not currently have a dealer network in the UK but there is a Tesla owned sales and service centre in Maidenhead.