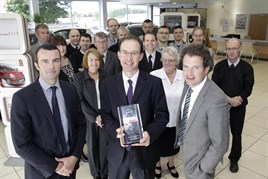 Three dealers from the UK have won global awards from Nissan in recognition of their success with sales and customer service.

Fred Coupe Nissan in Preston (pictured), JS Holmes in Wisbech and Yeomans of Worthing, Sussex came away with top honours.

A total of 117 dealerships around the world have won the award, three of which are in the UK.

"We’ve enjoyed continued success over the last 12 months or so and our sales figures are going from strength to strength."

Fred Coupe is a fourth-generation family dealer business and has been with the brand for nearly 40 years.

JS Holmes dealer principal Martin Holmes said: "We have been working with Nissan since 1976 and we're delighted to have won this award. It’s just reward for the effort that our staff put in as they try to deliver first-rate customer service.

"We're a small, rural dealer with a staff of about 30 and we're looking forward to having the Global Award kitemark on our publicity material."

On the company's sales performance, Holmes added: "Juke and Qashqai are continuing to perform well but Note in particular has been a success for us – we've sold more Notes than we have anything else."

The company is run very much along family lines with Martin Holmes' son Alex working as sales manager. He took over from Steve Holmes, Martin's brother, who retired last year along with his wife Linda. Martin's nephew Richie Holmes is a technician in the workshop.