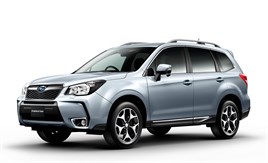 Subaru has announced that the fourth-generation Forester will launch in the UK next summer.

Both naturally-aspirated engines will feature a six-speed manual transmission as standard, while Subaru’s Lineartronic (CVT) transmission will be available on both petrol engines.

Haydn Davies, marketing director at Subaru UK, commented: “Since the Forester’s launch in 1997 it has gained a loyal following across the UK for its rugged, go anywhere abilities. These developments will ensure it remains a firm SUV favourite.

“The fourth-generation Forester will feature the latest All-Wheel Drive system and Boxer engines, while a lot of work has gone into improving refinement, ride quality and safety.”