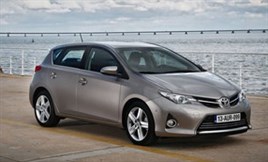 Toyota plans to reinforce the message that most of the cars it sells in Europe are built in Europe, especially in the UK.

"There is a growing awareness among customers that we build cars in the UK, and that's something we are going to make more of in the future," said Jon Williams, managing director of Toyota GB, speaking at the European launch of the Auris in Portugal.

To get the message across, more than 1,600 sales staff from Toyota dealerships are being given factory tours at the Burnaston, Derbyshire, plant where Auris and Avensis are built.

Some 180 sales staff a day from across Toyota's dealer network are visiting the factory over nine days, including parts not normally included in regular tours.

"The sheer scale of the operation seems to be what impresses them most," explained Nick Freeman, assistant general manager, corporate planning and external affairs at Toyota Motor Manufacturing (UK).

A car rolls off the production line every 66 seconds at Burnaston. There are 120 base models with, for example, 85 different wing mirrors and Auris and Avensis come down a single line in any combination of car, colour and trim. "It gives the sales staff something to talk about when they are with customers," Freeman added.

For Williams, there is another benefit of having all UK Auris models built in the UK. Orders can be tweaked up to a few days before the car is built so last minute changes of mind can be accommodated.