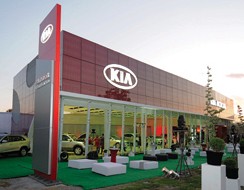 The development will see the premises grow in size and create up to 10 new jobs when it is completed in March next year.

The showroom will go from being able to display six cars to 12. There will also be an extended service reception and 10-seat customer waiting area.

Jason Westwood, Westdrive Kia managing director, said: “Kia’s continued growth in the UK means that a small showroom space just doesn’t do the brand justice anymore, so we are really excited about the expansion and refurbishment.”

Kia is not insisting on its new Red Cube showroom design, dealers can voluntarily opt in. There has been an identity update across the network which most have already completed.

Michael Cole, Kia UK managing director, told AM: "Clearly we want a brand identity but it's affectively a totem, entrance statement, signage, internal brand wall and furnishings. I'm mindful of putting an average on the cost but typically it's about £25,000.

"No one's going to put their hands up and shout to spend that but I honestly think the new signage is really bold and it's lifted our presence on the motor retail high street."

The minimum standard is a six car showroom. New builds are advised to be a 200sq ft showroom, but it's not part of the brand standards. The current minimum CI standards have been adopted by over 60% of the network already.

Arnold Clark in Northwich was the first dealer to take on the Red Cube design. Cole believes there will only be between five and 10 Red Cube dealerships in the UK.