Dacia to do battle in mini-SUV segment 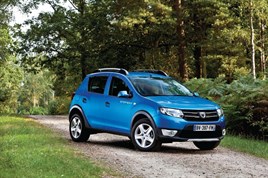 Dacia has revealed a B-segment SUV, the Sandero Stepway, which will rival Vauxhall's Mokka and Ford's EcoSport next year.

Order books will open in January for first deliveries in May, with the compact crossover priced from £7,995 to £10,795.

It will become the third model in the UK range for Renault's budget-brand Dacia, after its Duster SUV and Sandero hatchback go on sale in January.

The Romanian-built Sandero Stepway has already been on sale globally since 2008 and has proved popular in mainland Europe and South America.